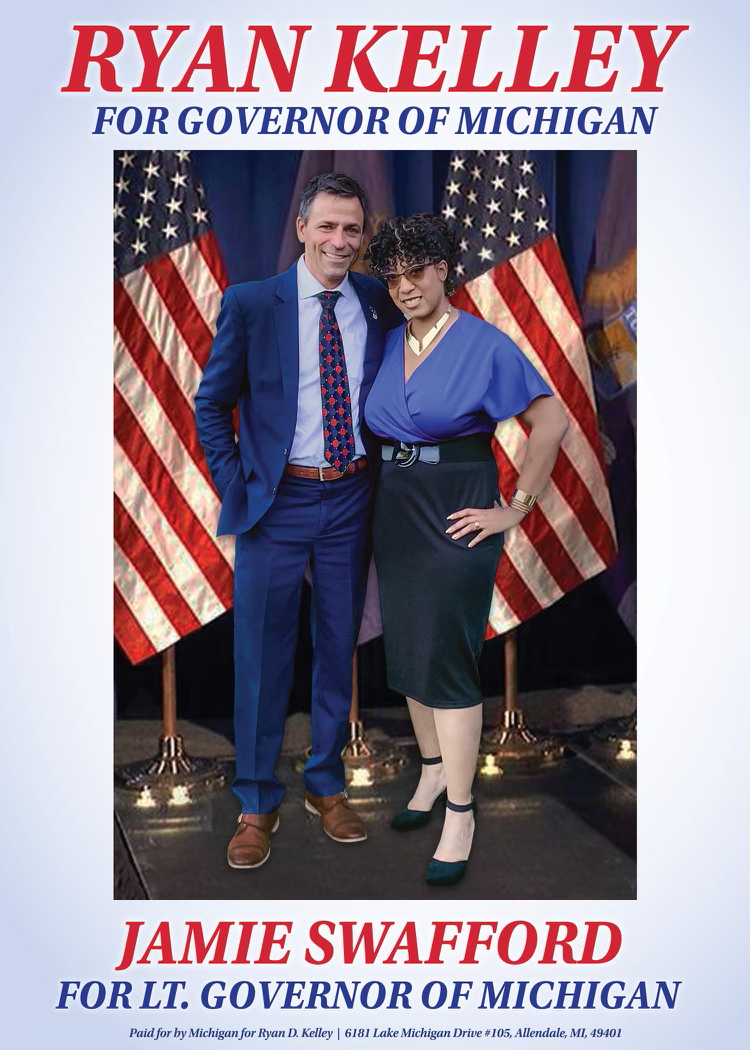 A Strong Voice for Freedom

Jamie Swafford has lived in Michigan her entire life. She settled in Richland, Michigan with her husband who recently retired from law enforcement.
She finished her own career in law enforcement recently serving as a liaison between the police and the court system.

Her strong belief in law and order put her on a path at a young age to becoming a law enforcement officer. Jamie graduated from Mattawan High School in 2003. She attended Kalamazoo Valley Community College while working a full-time job in manufacturing to pay for college, and received her Associate Degree in Criminal Justice. She completed her internship in her hometown of Kalamazoo at Kalamazoo Public Safety. She continued her studies at Ferris State University where she received her Bachelors Degree in Criminal Justice and completed the Police Academy.

From there, Jamie worked three jobs and went back to school for fitness and nutrition while waiting for a Law Enforcement opportunity.

She was hired by the Kalamazoo County Sheriff’s Department where she met and married her husband, Thomas. Shortly thereafter Thomas began a campaign for sheriff of Kalamazoo County. This campaign sparked an interest in politics and she realized the truth of the saying: “elections have consequences.” She actively became involved in the local Republican party.

During her husband’s 2020 campaign, Jamie began speaking at events around the county and assisted other local candidates in their runs for local offices.
She attended a kick-off rally called “Black Voices for Trump” in Atlanta, Georgia where she met many Black conservatives from around the country that she would ultimately see throughout the campaign season.

Also, in 2020 she met the Ethnic Vice Chair of the Michigan Republican Party during a Conservative Minority Summit that she helped to coordinate to educate minorities about Religious Liberties, Realities of Socialism, and the US Constitution. Through that encounter she was asked to run for Ethnic Vice Chair and was elected as the next Ethnic Vice Chair of the Michigan Republican Party in 2020. Jamie was excited to reach not only to Kalamazoo County residents but became a strong voice for freedom by continuing her efforts advocating for quality candidates to include State Representatives, Congressmen, Senators and numerous local officials in the state of Michigan.

After the election as the coronavirus hit the United States, she, along with others started to get discouraged about the state of affairs in Michigan and the U.S. She doubled her efforts to encourage and bring hope around the state by speaking at rallies, hosting and attending numerous events. Her speaking engagements led her to many corners of Michigan. She would later help to connect candidates with specific individuals that could assist with their run for office.

Jamie continues to support candidates and connect them with others from around the state.

During her time advocating for freedom around the state of Michigan, she met Ryan Kelley. On many occasions they would see each other during rallies and speaking engagements. As time progressed, they talked about the values and beliefs they both wanted to impart to future generations, as well as their mutual passion for America First, Michigan First candidates. Because of their shared vision for Michigan, Ryan has Jamie’s full and complete endorsement as Michigan’s 50th Governor.